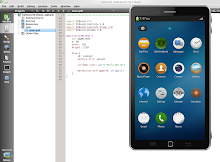 Alpha 4 is an unprecedented addition of Qt solutions that makes Tizen more interesting for application developers, designers and system integrators. Broad array of development options is now available from single Qt Creator-based SDK. If you're demanding one native SDK that can target Tizen, Android, iOS, specialized embedded systems and desktops, and more, do not look further!

Qt Creator is now centre of the Qt-oriented Tizen SDK. Building and deploying of C++ and Qt Quick apps to devices and emulator is now possible directly from Qt Creator. Integration has been delivered through a dedicated preconfigured Tizen plugin and kits using standard Tizen's build and deployment tools such as Smart Development Bridge (sdb).

Handling smartphone sensors has been further improved.
Responses to screen rotation changes have been corrected.

Qt is now delivered through Tizen RPM packages in dedicated repositories. Explicitly supported are Tizen IVI 3.0 (ia32), Tizen Mobile devices 2.2 and Tizen Emulator 2.2. Qt modules and features have been carefully split to packages to make life of hardware integrators easier. There are 300 packages in total!

5.2 alpha
Update to recently released official Qt 5.2 Alpha.
Final 5.2 is planned by the end of November.


It is expected that emerging Open Governance of Tizen 3.0 brings Qt for Tizen and Tizen communities closer and enable direct contributions to the Tizen project. Possible tasks include maintenance of Tizen-compliant Qt packages and testing Tizen emulator for specific use cases. Stability improvements would then land directly in Tizen.

Each release of Qt for Tizen is a result of spare time activity of 2 or 3 engineers. Imagine progress that will be possible if communities got more integrated!

Improvements in Qt packaging performed in this release already bring benefits to other platforms where Qt is widely used, for example Linux desktop, Android and Mer.

Detailed installation instructions have been prepared for application developers at http://qt-project.org/wiki/Build-Qt-for-Tizen. They explain all prerequisites such as installing Tizen SDK and dependencies. The installation process has been tested with Ubuntu/Kubuntu 12 and 13.

Qt for Tizen SDK support can be extended to other Linuxes, Windows and Mac OS X. Volunteers interested in that or in any other tasks are invited to contact (see Updates below). Feedback from application developers is highly welcome too.

Remember, you can always join us! Not only as a software developer - if you love technology, a Media Partners program exists to better reach global and local communities and individuals potentially interested in Tizen and Qt for Tizen itself.

Further integration between Qt and Tizen specifics and services is already in the works. Qt SDK for Tizen for many Linux distributions and support for Mac OS X and Windows would be added. Our road map is developed in the open.

If you wish to follow the initiative or comment please do so below on this blog or at your convenience use the following places:

Posted by Jarosław Staniek at 01:25